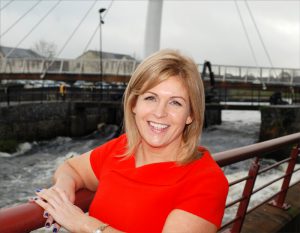 Rose Conway-Walsh was elected Teachta Dála (TD) of the 33rd Dáil Éireann for County Mayo on February 8th, 2020 on the first count. She is the first TD in her home region of Erris in over 50 years.

Rose was elected to Seanad Éireann on the Agricultural Panel in April 2016 and served as Leader of the Sinn Féin team. Along with her Sinn Féin colleague, Deputy Pearse Doherty, Rose was on the Joint Oireachtas Committee on Finance, Public Expenditure and Reform, and the Taoiseach. Additionally, she sat on the Joint Committee for Agriculture, Food and the Marine. She is a member of Sinn Féin’s Ard Chomhairle.

Previously, Rose was a councillor on Mayo County Council from 2009 to 2016 and the EU Committee of the Regions since 2014.

She holds a BA in Public Management and a Masters in Local Government.  Rose has a special interest in Economics and represents Sinn Féin at national and International Events as well as chairing the Party’s ‘Stand Up for the West’ campaign.

Rose has over two decades of experience in leading Community Projects in Mayo. She works towards an alternative vision to address social and economic exclusion and health inequality.

Passionate about Rural Ireland, Rose strives to put issues affecting the West front and centre of the Oireachtas.  After spending over a decade in London before returning to Ireland, Rose prioritises the equalisation of rights for Irish Citizens regardless of where they live.  In particular she is to the forefront in the fight to secure presidential voting rights for Irish Citizens in the North and abroad as well as advocating for the undocumented Irish in the US.

Rose lives in Belmullet, Co Mayo and is the mother of two teenage boys.

Elected Teachta Dála of the 33rd Dáil Éireann for County Mayo on February 8th, 2020 on the first count.

Elected to the 25th Seanad onto the Agricultural Panel.

During her time in London Rose held a number of senior positions in Multi-National Companies and was responsible for major fundraising campaigns for the non-profit sector.